September and October have been the months of hikes. It’s been surprisingly warm during the day, though the evenings have been chilly. I’ve gone somewhere almost every weekend with friends, and I’ve watched the trees turn from green to gold to rust.

At the end of September, a friend with a car took us on a difficult hike to Cima Rocca. I’m not that accustomed to hiking, though I enjoy it quite a lot, and this hike was particularly difficult. It went at a fairly steep uphill the entire way, until the very end, at which point it became nearly a Via Ferrata style climb. That is to say, there was a metal guide cable, and you had to use your hands to scramble up the rocks.

It took around three hours to climb to the top, with your thighs and calves protesting the entire way, and just one hour to come down, with your knees complaining. As hard as it was, the view from the top was absolutely worth it (though it was a misty day). Not only that, but there were some cool old caves dug out from WWII along the way, and a great deal of fresh air. In the end, this was one of the hardest, but also one of the most fun hikes I have done.

In October, I had the chance to visit Milan to meet the same friend who I met recently in Prague. Milan was… money. The city center was small in terms of area, but grandiose in terms of content. The cathedral was huge, the castle had a moat, and the shopping/fashion was so high-end, that the cheaper area was the one that had labels like Prada and Louis Vuitton. The expensive fashion district had clothes that looked like they had just come off a model– you know, the weird ones, that no normal human would ever wear.

Although I usually like visiting museums, the one in the castle somehow didn’t impress me. Maybe I’ve been spoiled by the world-class art in huge cities like Paris and Berlin. Overall, two days in the city were just enough for me to see everything, though if I was the shopping type, I’m sure I would have needed more. 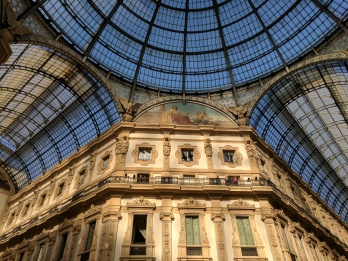 The next weekend, I headed back to Saarbrücken (SB) to retrieve my bike, and visit my friends. After a 10 hour commute through lovely Austria, I found myself in Germany again.

I think I have a sort of love-hate relationship with SB. Although I am frustrated at the quality of schooling, I can now look back and realize that it was better than what I will see here this year, because there were many different professors to work with, and many different course offerings. In addition, SB has an amazing community of students. Everyone in the local program is studying the same thing, so you have a lot of people to work with, and a lot in common with those around you.

Here in Italy, I have found it difficult to integrate into the local community in the same way. Everyone in CIMeC is studying cognitive neuroscience together, so they share all the same classes and have the same interests. It’s possible that we have more in common than I think, but I don’t share any classes with them, so I wouldn’t know anyway. The computer science students in Povo also share all their classes, and by virtue of this, have also formed a tight knit community. Basically, I am rather on the periphery of what is going on here. So while my personal life here is good, my academic life is shitty.

Coming back to SB reminded me of everything I am missing out on.

I returned from SB feeling rather disappointed, but fortunately, a friend was coming to visit for a couple of days, which helped lift my spirits. We wanted to show her around some of the sights, so we headed back into the mountains. The first day was unfortunately misty again when we took a small trip an a hike just above Rovereto. The second day was a little clearer, and we headed up higher, up a windy road into the hills nearby, where we hiked through falling tree leaves, to the top of a large hill.

My friend only had a couple days with us, and once again, I had to say goodbye. One great thing about my master’s program is that I get to meet a whole ton of amazing international people. However, the entire experience is basically a revolving door of goodbyes, as people finish their masters and head back to their home countries, and you wonder all the while if you will ever see them ever again.

In any case, I had to bear my sadness on the move, because the next day we went on a trip with the university right back in the mountains, to Rio Novella. I stumbled through this trip, a bit tired after the last three days, but happy to chat with all the various international students from different departments. We went through apple orchards, to a really steep canyon, and through a gorge to a church on top of a cliff. You’re probably tired of hearing this– the views were amazing.

Finally, at the very end of the month, I visited the Castello Beseno, which is a castle on top of a hill not far from Rovereto. It was a peaceful day, and there weren’t many tourists there, so we had a lovely stroll throughout the whole thing. It was a real medieval castle, like the kind you read about in history books! Although I’ve been in Europe for a year now, I didn’t visit that many castles last year, and as an American, I am still impressed by these historic structures. 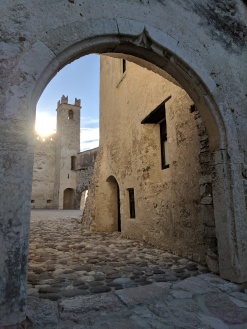 Apart from taking trips and just enjoying life… I have to admit that in terms of work, I’ve done very little this month. As I mentioned before, there doesn’t seem to be that much for me to do in the department here. I’m only taking a few classes, and they aren’t that good. The machine learning class in Povo has a really good instructor, but strangely it doesn’t have any homework, so I’ve just had to do my best to study on my own. The Human Language Technologies course in Rovereto is possibly the worst course I have ever taken. The topics are all repetition from last year’s coursework, and the lecturing is both boring and uninformative.

I’m quite frustrated (but unsurprised) that my second year university does very little to coordinate a curriculum that will be useful to second years. As I was warned by my second year colleagues last year, in the LCT program you basically end up doing Year 1 twice. My hope is that I will be able to teach myself everything that I haven’t managed to learn yet. I mean, I mostly taught myself last year anyway. I’ve been working on linear algebra in my spare time, but right now, my main goal is to find an internship and a master’s thesis topic.

At least daily life in Rovereto has been good.

However, there’s one more bit of frustrating news. My husband has been in Italy for almost two months now, and my stay permit is nowhere in sight. Once I do get the stay permit, it will take him probably at least a week to get the appointment with Questura (immigration) sorted so that he can be allowed to stay provisionally in Italy. However, with the Shengen visa waiver that Americans get, he is only allowed to be in Europe for 90 out of each 180 days. That means he has to go home ASAP, so that he can save some days for doing all the paperwork once I get my stay permit and he returns. So I guess he’ll be going back for Thanksgiving, and I’ll be here all alone for a while again.

It seems like it does help to have a second person splitting costs. Even with all the dining out and travel, I’ve managed to stay under budget. However, keep in mind, my utilities payment has not been charged yet (it will be very expensive at the start of November because of move-in costs, but should be much cheaper after that), and my internet bill was low I think because of last month’s deposit payment.

I see a lot of extraneous items below. It’s time to think about reigning it in again. Phone is too high, and I should probably finally pull the plug on Project Fi… I am just such a sucker for the convenience. The bouldering gym passes will eventually get used, but I am going to swap to mainly doing aerial now (I will be ramping it up to twice a week), so those were not really a necessity after all. The miscellaneous category was just silly spending. As usual, all the dining out is ridiculous. I will say that I won’t feel bad about the coats, because I got a seriously insane discount there.